The Important Reason This Rugby Squad Is Posing Nude

Posted by conquerors in Featured, From Around The World | 86 comments 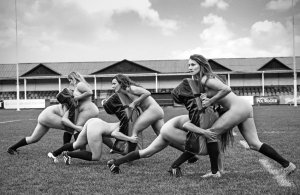 With a mission to help people dealing with eating disorders, the Oxford University Women’s Rugby team is abandoning their uniforms on the field.

As the long-awaited Varsity Match draws near — when Oxford will play Cambridge — Oxford’s squad is staging its second nude calendar. The calendar features stunning black and white photos of the team in action.

The initiative is designed “to promote a positive image of women and the beauty of the athletic body,” the team have declared on their calendar. A percentage of the profits will be donated to Beat, an association that aims to combat eating disorders.

Two years ago, the Oxford University Women’s Rugby team’s nude calendar drew support for Mind Your Head, an Oxford University-based organization that works to raise awareness for and eliminate the stigma associated with mental illness.

The photographs capture the women during practice, dressed in nothing but socks and shoes, as they perform their typical rugby positions, from tackles to scrums.

“The shoot was fun for the whole team, and the fact that we’re working together to do something for our club and collect money for charity gave us all the courage we needed to take on a chilly October afternoon without clothes on,” says one of the athletes. “The photo shoot took a long time because we wanted the rugby positions to be perfect, technically.”

“The calendar shoot was great fun for the whole squad. Not only was it a great team building exercise but knowing we were raising money for our club and for such an amazing charity spurred us all on the brave the chilly October afternoon,” team captain Carly Bliss said. “The shoot did take some time. We wanted the photographs to be technically accurate from a rugby point of view, in addition to underpinning the important messages we want to spread.”