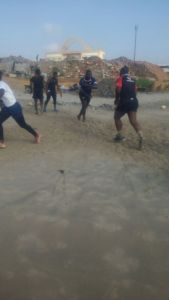 The reigning champions of the Ghana Rugby Club Championship (GRCC), Conquerors SC, continued their Saturday training sessions at the Borla Beach behind the independence square.

He says he is happy with the players’ work-rate but said that the reaction time of players is an area which he needs his squad to work on.

Ball handling has been a major area of focus which is also been tackled since the arrival of coach Dallas Lovemore who is currently assisting coach Simba Mangena with the Conquerors outfit.

The Conquerors outfit is also recruiting ladies into its female team. Three female players were in attendance for the Saturday morning session.